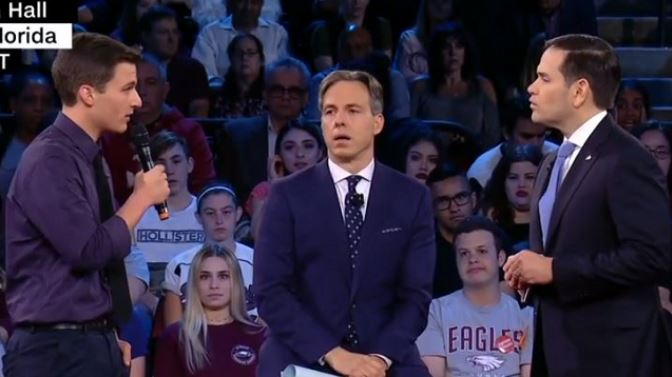 Did I just write that headline?

There’s lots on my mind (too often, and that’s between me and my medical professional, and I’ll get to the rest another time), but I’m going to limit myself to what just happened in southern and northern Florida over the past few days, since last week’s massacre at Marjory Stoneman Douglas High School.

You may recognize the young man on the left, above. He’s more than a survivor. His mother has been a friend since we sat next to each other in 7th grade science class.

Cameron Kasky wanted to know if Sen. Marco Rubio (R-Fla.), on the right, would agree to refuse further political contributions from the National Rifle Association. I know Natalie is very, very proud of her son’s persistence (and was so relieved last week).

Watch from a CNN Town Hall what it takes for Cameron to try to get a simple “yes” or “no” answer to his question from a sitting U.S. senator and former presidential candidate from his own state!

Then, the website Scary Mommy described the exchange as,

“You can almost feel Rubio biting back the phrases, ‘Because I said so!’ and ‘Go to your room!’ in this clip. He’s a 46-year-old career politician who just got schooled by a teenager whose biggest concern right now should be who he’s taking to prom. Instead he’s been thrust into the national spotlight as a leader of a major movement, and doing a fantastic job spreading their message.”

Honestly, I could probably never do as well offering up an opinion as author Megan Zander did, so I’ll let her continue.

“Fox News host Todd Starnes watched the exchange and was not pleased. But it wasn’t the Second Amendment issues at play that made Starnes angry. It was Kasky’s behavior as a teen speaking to an adult that rubbed him the wrong way. He took to Twitter to ask parents how they’d feel if their own child did what Kasky had just done.”

This crowd is hostile. Do the kids speak to their parents and teachers with the same level of disrespect?

Parents, what would you do if your child lectured and ridiculed a U.S. Senator on national television?

“To be clear, nothing Kasky said or did is even close to rude, let alone disrespectful. He addresses Senator Rubio as Senator. He doesn’t scream, he doesn’t curse. He even asks the crowd to settle down multiple times so Rubio can be heard and the discussion can continue. He even offers to contribute personally to Rubio’s campaign if the Senator will agree to stop accepting NRA funds.
“Does he speak passionately? Absolutely. He’s allowed to be passionate about the fact that 15 of his classmates and two of his teachers were murdered, and others injured. But he’s not being hostile — he’s pleading with his elected official for a straight answer on the question of whether he’ll continue to take monies from an organization that thinks mass loss of life is a fair exchange so others can own assault rifles for fun.
“If Starnes was hoping Twitter would assure him that Kasky deserved to be grounded indefinitely for his behavior, he miscalculated horribly.”

Get a bumper sticker on my car that said, “Proud Parent.” https://t.co/8jwY2cX7d2

I can assure you Natalie is damn proud and posted this, that she borrowed:

But sorry, ladies. My favorite social media post of the day is this one:

Ain’t it great when politicians from both sides of the aisle get along! Two days in the Florida legislature:

Tuesday, the legislature declared pornography to be a public health risk. I tweeted about that. Oh, and it also voted against a measure to consider banning the sale of assault weapons.

Wednesday, two of the same good folks elected to go to Tallahassee — Democratic Rep. Kimberly Daniels of Jacksonville and Republican Rep. Mel Ponder of Destin — got their bill “H.B. 839: The Display of the State Motto” passed by a wide margin.

It would requires each district school board to adopt rules for display of official state motto “In God We Trust” in specified places. It passed, 97-10, and is identical to a bill — S.B. 1158 — introduced by Republican Sen. Keith Perry of Gainesville. The Senate has done nothing with the bill since it was introduced Jan. 9. Rep. Daniels was first to file it last Nov. 29.

This is the law as it stands now. Statute 1003.44 is called “Patriotic programs; rules” and it mainly describes the Pledge of Allegiance, and other historic material school boards may let any teacher or administrator read or post. If passed, starting July 1, the motto must be displayed “in a conspicuous place” in all schools and all buildings used by the school board.

You can define “conspicuous” or let a judge.

Rep. Daniels lists her occupation as “Author/International Speaker, went to Florida State University; Jacksonville Theological Seminary,” but calls her religious affiliation “Non-denominational.” So I guess she’s not Jewish. (Sigh of relief.) Before the vote, she referred to God as “the light. And our schools need light in them like never before.”

Rep. Ponder lists his occupation as “President of a workplace ministry, Real Estate Agent.” (So definitely not.) And Sen. Perry has received awards from the American Conservative Union (Christian).

According to Wikipedia, “In God We Trust”

“was adopted as the nation’s motto in 1956 as a replacement or alternative to the unofficial motto of E pluribus unum, which was adopted when the Great Seal of the United States was created and adopted in 1782. … It is also the motto of the U.S. state of Florida.”

The day of the national change, during the Cold War, President Dwight Eisenhower also signed into law a requirement that “In God We Trust” be printed on all U.S. currency and coins.

FYI, both Republicans (of course, in name, 50 years apart). 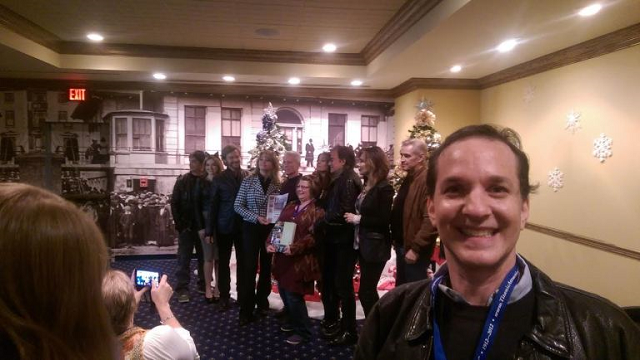 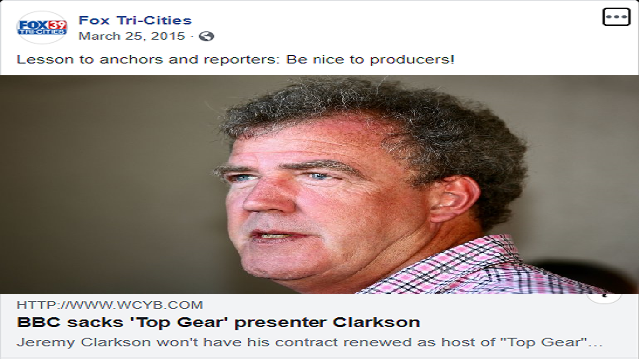 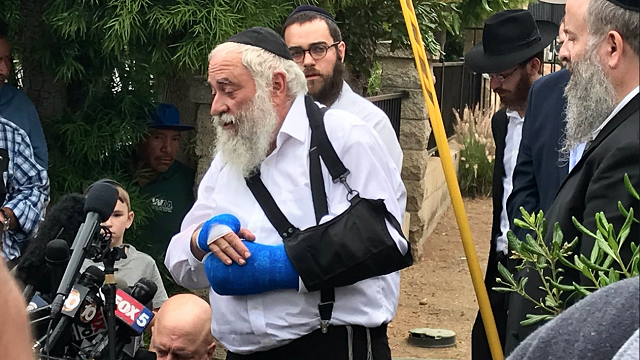 ← Got cable, satellite? You’ll foot the bill for Fox’s Thursday Night Football ← WSVN without Fox? It’s possible if….
%d bloggers like this: