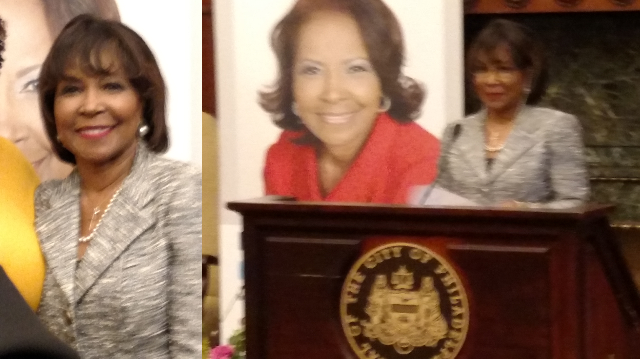 I had a busy week and the highlight was going to City Hall to hear a smart, strong and long-serving councilmember â€“ the amazingÂ Blondell Reynolds Brown â€“ announce she wonâ€™t run for reelection after this 20th year and fifth term of hers.

Reynolds Brown did incredible things over such a long period of time.
Youâ€™ll find the link to the main article online right here, but I highly suggest if you can read only one part, to make it the timeline above. It shows Reynolds Brownâ€™s commitment year after year, starting before the idea of demanding equal rights became what it is today. She got it early on.

Unfortunately, the pictures I took with my phone werenâ€™t high enough quality for the paper, so theyâ€™re here and also on top of this page, since they look much better than a generic newspaper article up there. Those images all seem the same from afar.
And City Hall is very cool, but Iâ€™d never been inside â€“ much less in the Mayorâ€™s Reception Room!

The Mayor's Reception Room in Philadelphia City Hall is pretty impressive! Of course, where are the pictures of the other mayors? We've been around since before 1776! pic.twitter.com/t6Bo4S7JME

I also followed up my story from last week on the fourth-grade boy allegedly raped at school, whose mother couldnâ€™t sue the school district in state court because she missed a deadline. That case has now been appealed to the Pennsylvania Supreme Court.
(The article is supposed to be online and Iâ€™ll show you when it is.)
Plus, expect to hear about the issue of whether school districts are required by state law to protect students from third-party harassment, meaning other children doing the bullying, and not just employees.

Add the mayor of South Bend, Ind., to the growing list of Democrats forming presidential exploratory committees. Does Pete Buttigieg has a chance? Who knows, but he has been a cityâ€™s chief executive, a veteran of the war in Afghanistan and a Rhodes scholar. (Not everyone has done one of the three!) If he thinks itâ€™s worth a try, then it probably is.
(Another good thing about writing for the paper or the web, versus TV or radio, is you donâ€™t have to pronounce the news subjectâ€™s name!)

And that subject goesÂ hand-in-hand with the best news of the week. We have a fantastic new editorÂ who pronounced her last name during our first phone conversation and I made sure to never forget.

Her name is Denise Fuhs

â€“ rhymes with goose and moose, and she prefers using the latter, thus so do I (see below) â€“ and she let the timeline on Blondell Reynolds Brown I researched from the PGN archives run!
And two weeks ago, she let me run a chart comparing the old and new chairmen of the Pennsylvania House State Government Committee, along with my article!
(I should probably stop while Iâ€™m ahead, but this is local news and what PGN does like no other media organization.)

Newspapers arenâ€™t like the web, where I can write as long as I want, and take advantage of that freedom frequently. Now, I really feel for all the TV reporters in my newscasts and everyone elseâ€™s, when told how long they had to tell their stories. Maybe getting used to the newspaper space situation is a taste of my own medicine! (I had the luxury of giving myself more time for the stories I wrote as the newscastsâ€™ producer!)
But Denise and I think very similarly, have the same pet-peeves, and hit it off â€“ and I like copy-editing â€“ so Iâ€™m very happy. Why isnâ€™t getting along as easy for so many people in the media?

← Law on protecting schoolchildren may go to Pa. Supreme Court ← Harris Wofford, hard work, a vacation and a memory
%d bloggers like this: