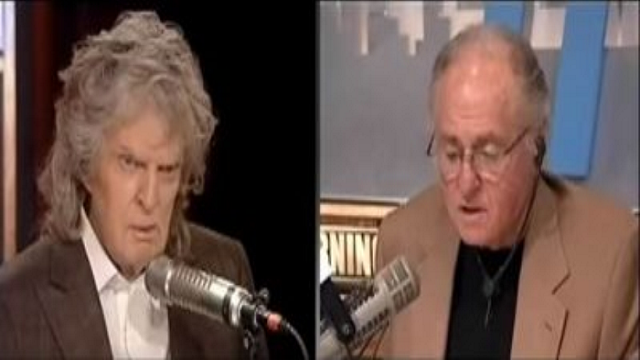 What’s famous to you obviously relies on where you’ve been and what you’ve noticed, but these people have had national exposure for at least part of their long working lives.

It took longer than a New York minute, but Howard Stern would be happy to hear Warner Wolf is suing Don Imus — and it has to do with a radio program that’s about to go off the air (due to age?).

Wolf, 80, is best known as the WCBS-TV sportscaster who popularized the phrase “Let’s go to the videotape!”

Shock jock Imus, 77, may be most popular for being Stern’s arch-enemy.

Wolf claims he was fired from Imus’ radio show — which is ending, anyway — due to age discrimination.

The Associated Press reported Wolf’s suit, filed Thursday, claimed Imus once said it was time to put Wolf “out to pasture” and “shoot him with an elephant dart gun.”

Wolf is also suing three executives with WABC-770 AM and its parent company Cumulus Media for not paying Wolf his $97,500 severance. The suit called that “adding insult to injury.” Neither Imus nor a spokeswoman for Cumulus commented.

The actual firing happened in 2016.

The New York Daily News reports the Imus-Wolf trouble really started a few months before the 2016 firing when Wolf moved to Naples, Fla., and contributed to the show from there.

According to The Daily News, “You asked me if I was ok with you doing sports from Florida. I said I was. We tried it. It sucks,” Imus emailed shortly before Wolf’s final appearance on Nov. 4. “If you’re in the studio in New York … it’s terrific. Anything else is not.”

Keep in mind, Imus himself left the Big Apple a year earlier, in 2015, to live on a Texas ranch! The rest of the crew works in New York.

This is the background: Imus worked for several New York stations — “up and down the dial,” as WKRP in Cincinnati‘s theme song lyrics go — and also in different cities. He was fired from WNBC-660 AM in 1977 but rehired in 1979, where Stern was his co-worker for a few years. Imus stayed as the station became WFAN-660 AM and lasted all the way until 2007. In the 1990s, the show became nationally syndicated and also began simulcasting on MSNBC.

(The three major networks’ radio stations have been sold off: The NBC radio stations under new owner General Electric in the late 1980s, although Westwood One — owner of Mutual Broadcasting System — bought the NBC Radio Network name. Then, Westwood One entered into an operations agreement with Infinity Broadcasting, which CBS parent Westinghouse bought, so all the stations became combined and CBS Radio people produced “Mutual” and “NBC”-branded newscasts! NBC News Radio broadcasts returned and they’ve been produced by iHeartMedia since last year. By the way, ABC sold off its division to Citadel Broadcasting — now part of Cumulus Media — in 2007, and CBS Radio was just sold to Entercom this past November, 2017.)

Oct. 7, 1988: WNBC-TV reporting live at the end of WNBC-660 AM after 66 years. Roger Grimsby worked for WNBC-TV at the time. The TV station had to dump out of his recorded piece to catch the last seconds before the switchover. Weatherman Al Roker interviews Imus at a rainy Shea Stadium since WFAN was and is all-sports. It was a different and much better world when stations and on-air talent were allowed to have distinct personalities. Now, everything looks the same — city to city — but I’ve gone off on corporate ownership here, here, here and here (starting with the most recent).

In the 1970s, he went national on ABC-TV’s Monday Night Baseball and the Olympics but returned to his local sportscasting roots, on WABC-TV in New York.

Then, he switched to competitor WCBS-TV and returned to WUSA-TV in Washington (the former WTOP) until his 1995 firing.

That’s when he became acquainted with Imus, subbing as sports anchor on the Imus in the Morning show on WFAN and simulcast on MSNBC.

Wolf returned to WCBS-TV in 1997. You may have seen him almost lose one of his dentures in 1998 when it popped out on camera. I was producing the 11pm news at Connecticut’s CBS affiliate WFSB during that time and chose not to embarrass Wolf by showing it. Besides, our viewers in Fairfield and New Haven counties had access to WCBS-TV, so his station was also our competition.

Little did I realize, The Daily News reported, “A few days later, he brought a pair of clicking teeth onto the air with him to poke fun at the incident.”

He stayed there until his 2004 firing, when he was replaced by the younger Chris Wragge, who since then has moved over to news.

The outcry over Wolf’s firing got him hired by WABC-AM, where he worked on a show with Guardian Angel Curtis Sliwa, and defense and civil rights lawyer Ron Kuby.

In the meantime, WFAN fired the controversial, irreverent, insulting Imus in 2007. Imus had made racist and sexist comments about the Rutgers University women’s basketball team (“nappy-headed hoes” and more). Got all that?

Months later, Imus was hired by WABC-AM — reunited at the same station as Wolf — and after about two weeks, Wolf became his sportscaster again!

In late 2009, the show started being simulcast on the Fox Business Network. That lasted until 2015 when Imus moved to Texas. The next year, Wolf moved to Florida and that supposedly led to his firing.

Wolf was replaced with another colorful sportscaster, Sid Rosenberg, who is only in his early 50s.

The Miami Herald‘s Greg Cote referred to Rosenberg with the phrase, “drugs, alcohol and gambling leading to a history of erratic behavior, suspensions and firings.”

Whatever you say about Rosenberg, he has been back and forth between New York and Florida.

Rosenberg worked in West Palm Beach and in 2000, returned to New York at WNEW-FM 102.7, which has since changed formats.

After that, he worked mornings at WFAN on Imus — ironically with Wolf — but there was trouble on the set in the studio. After a few months, Rosenberg added duties as co-host of the midday show.

He was controversial on Imus — with remarks about the Williams sisters, tennis players and the U.S. women’s national soccer team — but fired after making crude remarks about Australian singer Kylie Minogue’s breast cancer diagnosis.

Rosenberg found himself back in Florida — at Miami radio station WAXY-790 AM The Ticket for four years — but still, he called in to WFAN and even served as a substitute sportscaster! It was Rosenberg who reported on Rutgers in 2007, which led to Imus and his producer’s remarks, and their firings.

In 2009, Rosenberg jumped to competitor WQAM-560 AM (replacing Neil Rogers middays and Jim Mandich on the Miami Dolphins post-game show), but was fired in 2012 after a DUI arrest in Hollywood.

“According to police, Rosenberg — the WQAM-AM (560) host whose license hath been suspended thrice — was really, really drunk when he said he was on his way home from Tootsie’s Cabaret, the Miami Gardens full-nudity strip club. … Two Hollywood police officers found Rosenberg sitting in the driver’s seat of his 2011 GMC Yukon — the driver’s side door was open, and the engine was running. Oh, and he was parked in the middle of 63rd Avenue. They called a third officer, Jon Cooke, who ended up writing the police report.”

Then scroll through and read details from the Booking Report.

He was also charged with driving with a suspended license. It was his first offense on each count.

That’s when he ended up at Palm Beach sports radio station WMEN-640 AM.

Rosenberg stayed until becoming co-host of The Bernie and Sid Show on — you guessed it — WABC-AM! That was in January, 2016. In November, he replaced the fired Wolf on Imus.

But last month, Imus announced the show would air its final episode on March 29.

What a crazy business! It has to be, with such crazy people. 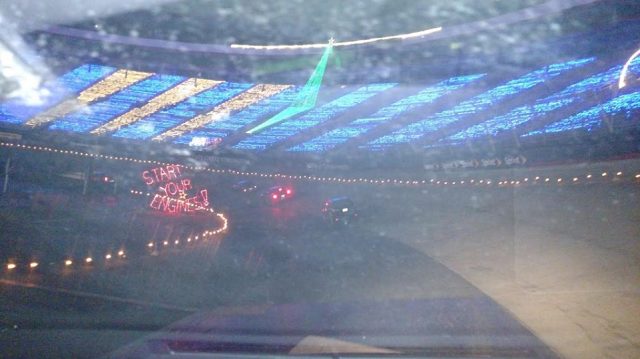 ← Killing kids and desecrating the name of Marjory Stoneman Douglas ← Got cable, satellite? You’ll foot the bill for Fox’s Thursday Night Football
%d bloggers like this: